I recently chatted to Leigh, a maintenance fitter, who really sums up what frontline continuous improvement should be about. Throughout our conversation, it’s clear that Leigh is self-directed, aware of and aligned to business goals, strong on documentation and delivery, and forever finding better ways to do things. This behavior doesn’t come about by accident. It requires strong leadership, consistent coaching and trust in teams. This culture then creates opportunities to find improvements where previously it was not possible, or where the outcomes were not captured and counted. Watch the video (5 mins) or read the transcript below.

Nick: Alright so we’re here with Leigh. Do you want to tell us what your job is?

Leigh: I’m the CNC programmer here at Davey Water Products. I run 3 CNC machines. [We’re] not an overly big machine shop, but we still work as a machine shop and also sub-assembly shop, so we do a lot of sub-assemblies as well as machining at the same time. To utilize our efficiency. But I’m a maintenance fitter by trade.

Nick: And we’re going to have a look at one of the A3’s you’ve been doing. So this is an improvement A3 – is that right? Take me through it.

Leigh: All this stuff is to reduce the changeover speed of the CNC machines. Basically to change any stoppages. So if we ever have a problem which is reducing our cycle time or if a changeover seems to be a very lengthy process and there’s ways to improve it – we’ll improve it. I’m kind of the sort of person that will go out of my way….

Nick: …are you part of the improvement team here? There is an official Continuous Improvement Team here.

Leigh: No, not really. I’ll just improve things myself. So if I have a problem with something I will just go out of my way and fix it up. Which is what this software has actually given me the ability to do – to document that. Because a whole lot of times that kind of stuff isn’t documented and no one knows about it. All they know is the machine wasn’t running for an hour – because I was off making something to make things better for next time round. So now the upper management can actually see a lot of what I actually do. Because a lot of this stuff was never documented before. This kind of stuff just happened.

Nick: So you were doing it but it wasn’t visible to other people.

Leigh: So no one knew things about, like, if I modified a trolley. I would have normally just gone off and done that. This is one example – I made a trolley more safer. It used to have a fixture that used to rock-n-roll on a trolley. Now it just sits there nice and stable, and we can also fit two fixtures on the trolley instead of just one. To utilize space better. That’s just one example. Shall we go through a few other examples or…

Nick: So what are you trying to achieve with this one?

Nick: And why did you start on this?

Leigh: Because that was my biggest frustration. The basic ones like the toolbox. You’d open the toolbox and you can’t find the drill because they’re everywhere. So then I just organize all that kind of stuff, so now I can go find a drill straight away. That’s 10 minutes there, stuffing around and getting angry. But things like that would have just happened and now it’s on this. And that why I linked all this stuff together.

Nick: Had you done an A3 before? Was this something you’re familiar with?

Leigh: Nah, but it’s all pretty easy to use. I basically went and did a brief description of the Current Conditions of how things were before I did all my improvements. I then…I just wrote a description of how I improved everything. A few pretty pictures show how things have changed. So a lot of it’s all about pre-tool setting and stuff like that, and a lot of fixtures where we used to hold them quite dodgy. Now we’ve got special better fixtures just to clamp the job and set it up a lot quicker. You can see some of the ‘before’ pictures where everything’s quite dirty. Probably could have added a few more pictures but time is of the essence sometimes.

Nick: And so over what period of time would you have pulled all of this together?

Leigh: It’s probably about 6 months. So this would have got done over 6 months – to improve my own area. No one really drove me to do it, but a lot of these things that annoyed me – I would fix up. That’s what’s good about it. I find that I can now put these things down in writing a lot easier than just an email.

Leigh: I would email either a Production Engineer or the Production Manager. Sometimes they are busy people, so those emails get ignored. Especially if it’s a very minor thing. A lot of the time if it’s someone like me going “I made a quick jig to make this job quicker” and I wouldn’t put it anywhere, I’d just do it. And no one would know about it. But now it’s “Oh, so now we’re doing that process quicker” for example, or more rigid.

Nick: So what’s the next one you’re going to work on?

Leigh: My next A3 is to do with actual speeding things up. So not so much with stoppages. It’s all to do with cycle time.

Nick: Ok. That’s awesome, thanks for your time. 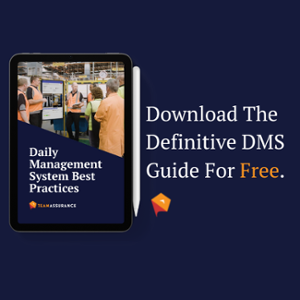 A whole C.I. framework to empower the frontline, not just locally optimised 'islands'.

Providing the autonomy to individuals (like that described above) requires systems that support decision making at every level. These should supported by the right data and, at all times, aligned to strategy. Facilitating individual Mastery requires systems that allow people to freely access the training & know-how they need to better themselves.

To then provide individuals and teams with a purpose larger than themselves, they need a communication process that connects them & their work routinely (and specifically) to the big picture.

The image below outlines how we designed an interconnected TeamAssurance platform which achieves these goals. One that avoids the locally optimised and disconnected 'Point solutions' (digital or analog) that do not help sustain either lasting business performance or maximising individual employee potential.

TeamAssurance enables organisations to make the most of continuous improvement efforts at the frontlines. If you're a business in need, or a consultant with clients in need, and you like to explore the opportunities offered by digital aids to Lean tools contact us for a demonstration.

Effective and project reviews in the same sentence? Yes, it is possible with lean A3 reports.

Scaling and Sustaining an Excellence program

We partnered with NCI Packaging to streamline communication, reduce administration and increase capacity of their Excellence program. By migrating their improvement...